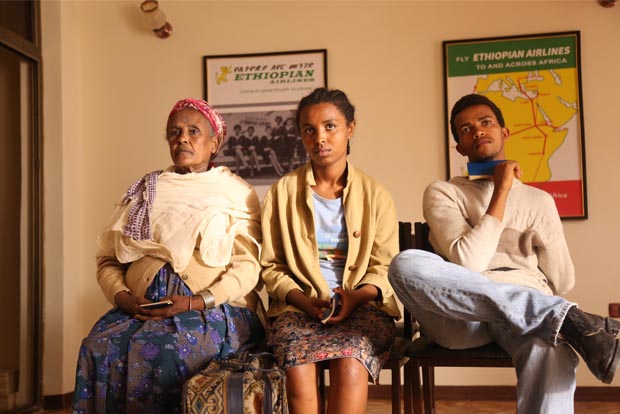 The official jury of the 16thedition of FCAT, composed of Burkina Faso director Berni Goldblat, London programmer of Guyanese origin June Givanni and Spanish distributor Enrique González Kuhn, was responsible for deciding the winners of four of the seven awards presented by the festival this Friday: Best Fiction Feature, Best Documentary (sponsored by Casa África), Best Actor and Best Actress in the Long-Sightedness section.

For the jury, “it has been a pleasure to watch all of the fiction features participating in this section” and they acknowledge the excellent quality of every one of the films. However, they considered one film to stand out particularly due to the way in which the main idea, which addresses a very complex theme, is handled using visual poetry, backed up by stunning performances and solid scriptwriting and directing. For these reasons, they awarded Best Fiction Featureto Fig Treeby Aäläm-Wärqe Davidian, an Israeli/Ethiopian production which addresses issues of war and interculturality.

In addition, the jury decided to award a Special Mention to another fiction feature “for its ability to tell an anti-war story in an original manner with universal significance”. A hymn to life. The Mercy of the Jungleby Joël Karekezi.The Mercy of the Jungle received the Etalon d’Or at Fespaco, making it the first Rwandan film to win the prize.

For the Best Feature-Length Documentary award, the jury selected a film which is “a very exciting project from a promising director with clear talent”. The film features strong characters and engages the audience in their struggles, which go beyond football and sport, and has had a huge impact on the struggle for freedom among the Sudanese population. The prize for Best Documentary was awarded toKhartoum Offside by Marwa Zein.

The film premiered at the 2019 Berlinale and was recently screened at the Hot Docs festival in Toronto. It is one of the few films to be produced in Sudan. Khartoum Offsidelooks at the fight for women’s rights in the context of football.

The Long-Sightedness jury dedicated the Best Actress award to the main character who appears in almost every scene of this intense, dramatic story, and who carries the weight of the action throughout the whole film, as the title of the film, Sofía, demonstrates. The prize forBest Actressthus went to Maha Alemi. The young actress made her acting debut in the film, accompanied by veteran actress Sarah Perles.

The sombre, powerful performance by Mohamed Dhrif in the film Weldi (directed by Mohamed Ben Attia) earned him the prize for Best Actor. The jury viewed the film as a very modern, intense story which plays with emotion, much of which is expressed through the eyes and expressiveness of its talented leading actor. Weldi premiered at Directors’ Week in Cannes and is the second film by Mohammed Ben Attia, who won the Special Jury Award at Berlinale for his film Heldi.

The RTVE jury awards the ‘Griot of the Winds’ prize for interculturality to The Lost Warrior by Nasib Farah, because this intimate story of a young modern-day couple who are separated by thousands of kilometres, one in Africa and one in Europe, reflects on the importance of integration and interculturality in a diverse and complex world.

The Andalusian jury awards the prize:

The FCAT audience voted for the prize:

The 2019 FCAT audience voted for the documentary Renault 12. This is the first feature film from director Mohamed El Khatib, who recounts his mother’s death as he travels from Orléans to Tangier in a Renault 12 in which he rediscovers his roots, documenting unexpected encounters and depicting social, political and cultural landscapes.